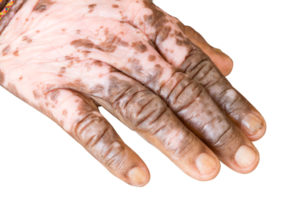 Vitiligo or Leucoderma or White Patches is a common condition where white patches develop on the skin due to loss of pigment from affected areas of the skin. There are usually no other symptoms. In some cases the pigment can be restored with medical treatment & phototherapy without surgery. Also the affected area can be covered by skin camouflage creams& colors.
If the Vitiligo is noticeable by other people, embarrassment can lead to self-esteem problems, and in some cases depression. Thus it is considered as a social stigma. These girls & boys with white skin patches, especially demand correction if they are in marriage age group. Some elderly parents also wants vitiligo correction to avoid rejection of their son or daughter for marriage, as vitiligo is known to run in some families.

The skin has two layers the epidermis and the dermis. Beneath the dermis is a layer of fat, and then the deeper structures such as muscles, tendons.
Melanocytes: These cells are dotted about at the bottom of the epidermis. They make a pigment called melanin. The melanin is passed to the nearby skin cells which colors the skin and protects them from the sun’s rays. Melanin causes the skin to tan in fair skinned people. Dark skinned people have more active melanocytes. The melanocytes are stimulated when exposed to sunlight to make more melanin.

Vitiligo is a condition where pale white patches develop on the skin due to a lack of pigment (color) in the affected areas of skin.
Areas of skin with patches of vitiligo have no or very few melanocytes. Therefore melanin cannot be made, and the color of the skin is lost. It is not known why the melanocytes go from affected areas of skin. They may be destroyed by the immune system or ‘self-destruct’ for reasons not yet known. There is some genetic factor involved and vitiligo may ‘run in the family’.
An autoimmune disorder – the patient’s immune system becomes overactive, and destroys the melanocytes
Genetic oxidative stress imbalance.
A stressful event.
Harm to the skin due to a critical sunburn or cut.
Exposure to certain chemicals.
A neural cause.
A viral cause.
Vitiligo is not transmittable.

Less than 1% people develop vitiligo. Men and women are equally affected. It can develop at any age. However, it begins before the age of 20 in about half of cases. Vitiligo is not infectious.

The most common sites involved are the face, neck, and scalp. Other common sites include the backs of hands, front of knees, and elbows. In the areas of the scalp that are affected, the hair too is affected.

How is the progress of Vitiligo?

The course and severity of vitiligo varies from person to person. Sometimes a few small patches develop slowly and progress no further. Sometimes a number of patches develop quite quickly and then remain static for months or years without changing. However, it is quite common for the white patches to gradually become bigger and for more patches to appear on other parts of the body. Large areas of the skin may eventually be affected.

What are the symptoms of vitiligo?

There is no natural protection from the sun in affected areas of skin. Vitiligo skin gets sun burns much easily than normal skin.

It is the most common type of vitiligo and occurs in up to 90% of the people who have this disorder.

In non-segmental vitiligo, the patches often become visible equally on both sides of the body, with some kind of symmetry. These unusual symmetrical patches most commonly appear on skin that is exposed daily to the sun, such as the face, neck, and hands, but it also appears on these other areas:
backs of the hands, arms, eyes, knees, elbows, feet, mouth.
Non-segmental vitiligo has sub-categories:
Generalized Vitiligo: The most familiar pattern, it has no specific area or size when the white patches start occurring.
Acrofacial Vitiligo: This type of vitiligo is considered only when the appearance is mostly on the fingers or toes.
Mucosal Vitiligo: The appearance of the depigmentation generally around the mucous membranes and lips.
Universal Vitiligo: It is very rare since depigmentation has to cover most of the body.
Focal Vitiligo: one or a few scattered white patches in a small certain areas. It is often noticeable in young children.

Segmental Vitiligo has a different form of appearance. This condition spreads more rapidly, but is considered more constant and stable than non segmental. It is definitively much less common, and it affects only about 10% of people with this condition. But unpredictably, segmental vitiligo is more noticeable in the early ages affecting about 30% of the children that have been diagnosed with vitiligo.

Surgery is very much helpful in stable vitiligo patches. Especially in marriage age group patients, if there is very slow or no response to medical treatment, then plastic surgery is a better and quicker option.Surgery is contraindicated in children & in active unstable vitiligo patches. Outcome varies with the body areas involved such as lips, genitals, eyelids, bony prominences, etc.

This is most commonly used surgical method. Plastic Surgeon harvest skin grafts from the normal, pigmented skin (donor sites) and places them on the dermabraded surface of depigmented areas (recipient sites).
Skin graft procedure should never be performed in children. It should be performed in adults only if no new white patches have appeared or become worse in at least a year, and if the vitiligo was not originally triggered by damaging the skin due to a sever sunburn. Such skin grafts are used as sheets of graft or as small stamp grafts with Meek Micro-grafting technique. Sheets of split skin grafts produce uniform pigmentation with no cobblstoning.