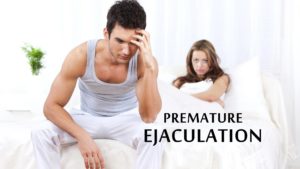 Premature Ejaculation is uncontrolled ejaculation either before or shortly after sexual penetration. It happens with minimal sexual stimulation and before the person wishes. It may result in unsatisfactory sex for both partners. This can increase the anxiety that may add to the problem. It is one of the most common forms of male sexual dysfunction. It has probably affected every man at some point in his life.

Most cases of premature ejaculation do not have a clear cause. With sexual experience and age, men often learn to delay orgasm. Premature ejaculation may occur with a new partner. It may happen only in certain sexual situations or if it has been a long time since the last ejaculation. Psychological factors such as anxiety, guilt, or depression can also cause it. In some cases, it may be related to a medical cause such as hormonal problems, injury, or a side effect of certain medicines.

The main symptom is an uncontrolled ejaculation either before or shortly after intercourse begins. Ejaculation occurs before the person wishes it, with minimal sexual stimulation.