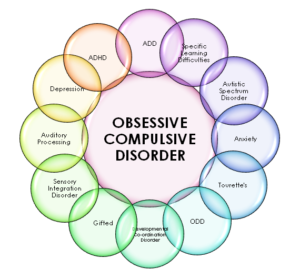 Obsessive–compulsive disorder (OCD) is a mental disorder where people feel the need to check things repeatedly, perform certain routines repeatedly (called “rituals”), or have certain thoughts repeatedly. People are unable to control either the thoughts or the activities for more than a short period of time. Common activities include hand washing, counting of things, and checking to see if a door is locked. Some may have difficulty throwing things out. These activities occur to such a degree that the person’s daily life is negatively affected. Often they take up more than an hour a day. Most adults realize that the behaviors do not make sense. The condition is associated with tics, anxiety disorder, and an increased risk of suicide

People with OCD may have symptoms of obsessions, compulsions, or both. These symptoms can interfere with all aspects of life, such as work, school, and personal relationships.

Obsessions are repeated thoughts, urges, or mental images that cause anxiety. Common symptoms include:

Compulsions are repetitive behaviors that a person with OCD feels the urge to do in response to an obsessive thought. Common compulsions include:

Not all rituals or habits are compulsions. Everyone double checks things sometimes. But a person with OCD generally:

Some individuals with OCD also have a tic disorder. Motor tics are sudden, brief, repetitive movements, such as eye blinking and other eye movements, facial grimacing, shoulder shrugging, and head or shoulder jerking. Common vocal tics include repetitive throat-clearing, sniffing, or grunting sounds.

Symptoms may come and go, ease over time, or worsen. People with OCD may try to help themselves by avoiding situations that trigger their obsessions, or they may use alcohol or drugs to calm themselves. Although most adults with OCD recognize that what they are doing doesn’t make sense, some adults and most children may not realize that their behavior is out of the ordinary. Parents or teachers typically recognize OCD symptoms in children.

If you think you have OCD, talk to your doctor about your symptoms. If left untreated, OCD can interfere in all aspects of life.