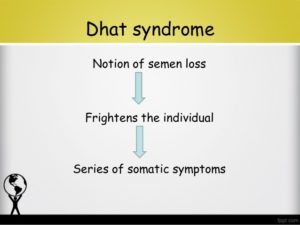 Dhat syndrome (“semen loss”-related psychological distress) is a culture-bound syndrome seen in the natives of Indian subcontinent, but it is prevalent in other cultures also. Its diagnosis and management issues need to be taught to postgraduates in their teaching program. This syndrome involves vague and multiple somatic and psychological complaints such as fatigue, listlessness, loss of appetite, lack of physical strength, poor concentration, forgetfulness and other vague somatic troubles. These symptoms are usually associated with an anxious and dysphoric mood state. These patients may also present with or without psychosexual dysfunction. The management of Dhat syndrome needs serious attention. The understanding of this condition by Modern Medicine fails to impress most of the patients, and the explanations and reassurances offered prove to be not of much use.

Young males are most often affected, though similar symptoms have been reported in females with excessive vaginal discharge or leucorrhea, which is also considered a “vital fluid”.

Premature ejaculation and impotence are commonly seen. Other somatic symptoms like weakness, easy fatiguability, palpitations, insomnia, low mood, guilt and anxiety are often present. Males sometimes report a subjective feeling that their penises have shortened. These symptoms are usually associated with an anxious and dysphoric mood state.