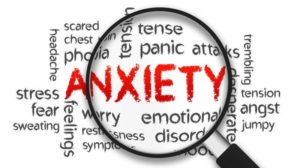 Occasional anxiety is a normal part of life. You might feel anxious when faced with a problem at work, before taking a test, or making an important decision. But anxiety disorders involve more than temporary worry or fear. For a person with an anxiety disorder, the anxiety does not go away and can get worse over time. The feelings can interfere with daily activities such as job performance, school work, and relationships. There are several different types of anxiety disorders. Examples include generalized anxiety disorder, panic disorder, and social anxiety disorder.

People with panic disorder have recurrent unexpected panic attacks, which are sudden periods of intense fear that may include palpitations, pounding heart, or accelerated heart rate; sweating; trembling or shaking; sensations of shortness of breath, smothering, or choking; and feeling of impending doom.

People with social anxiety disorder (sometimes called “social phobia”) have a marked fear of social or performance situations in which they expect to feel embarrassed, judged, rejected, or fearful of offending others.

Researchers are finding that genetic and environmental factors, frequently in interaction with one another, are risk factors for anxiety disorders. Specific factors include: